Casting Aurora in a New Light: Genocide, Geopolitics, and Transnationalism

The Armenian Genocide is formally recognized as having started in 1915 and ending in 1918. It is estimated that 1.5 million Armenians were systematically slain. Sixteen-year-old Arshalouys Mardigian survived. Her survival story was turned into a memoir and sold by the hundreds of thousands.

Aurora and the Near East Relief

A US based international human rights relief organization, the American Committee for Relief in the Near East (Near East Relief/NER) approached her in New York City and ask her to tell her survival story. The NER then made her sign some contracts.

After Arshalouys recanted her survival story, Harvey and Eleanor Gates became her legal guardians and had her change her name to Aurora Mardiganian. Aurora was the choice anglicization of her name because Arshalouys in Armenian translates to “the first light of the morning." The release of her memoir then followed in 1918 in serial print. Under the titles of My Two Years of Torture in Ravished Armenia, Martyred Armenia and Ravished Armenia and My Two Years of Torture by the Turk, her story was nationally circulated in newspapers such as the The New York American, The Los Angeles Examiner, Washington Times, and Richmond Times Dispatch, to name a few, every consecutive Sunday from Aug. 18 to Nov. 24, 1918 (Slide 7-8). 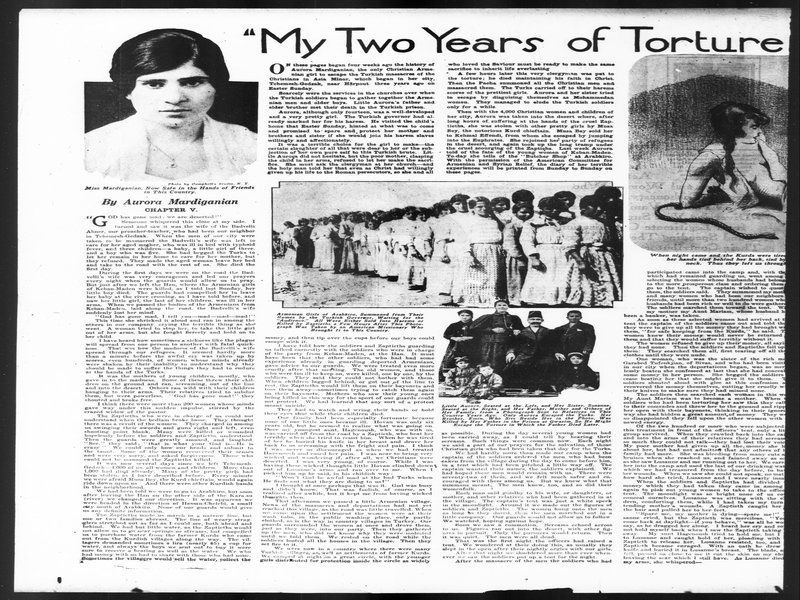 What else did the Near East Relief (NER) do with Aurora’s Story?

How was Aurora Exploited?

What Are the Aims Of My Research?

Slide, Anthony. Ravished Armenia and the Story of Aurora Mardiganian. Jackson: U of Mississippi, 2014. Print.